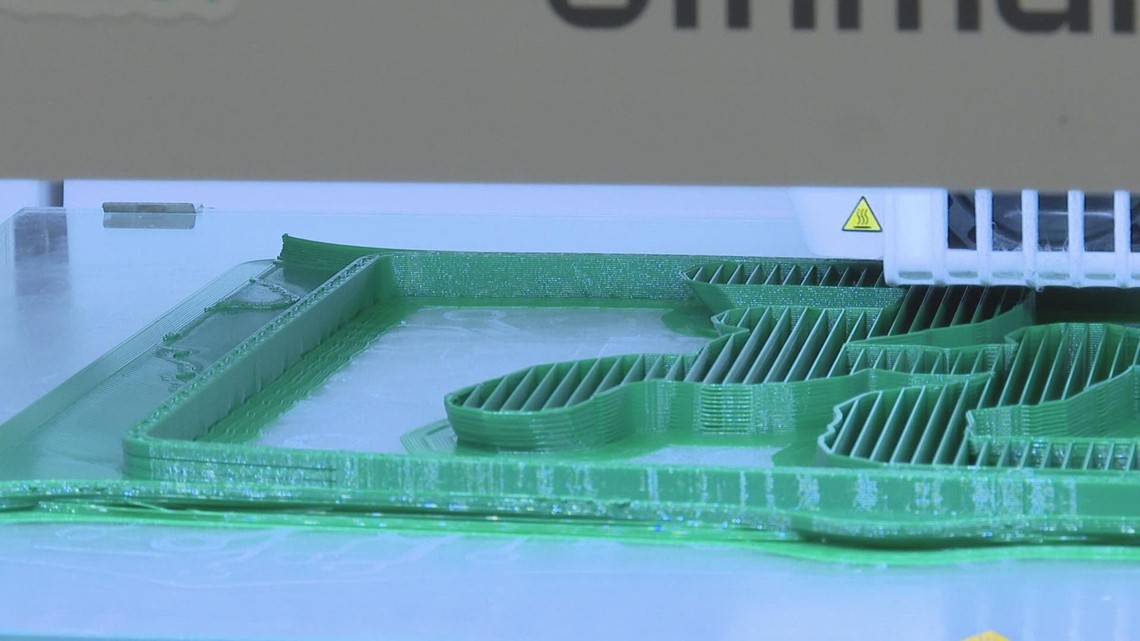 Brian Overshiner is able to print almost anything the healthcare system may need.

INDIANAPOLIS — 3D-printing technology has been used to create toys, decor and even building musical instruments, but IU Health has found a way to use the technology to improve patient care.

Tucked away inside University Hospital, Overshiner keeps a close eye on the work his 3D printers are churning out. But before he had found his passion for printing, Overshiner worked for more than a decade as a radiation therapist.

“I treated cancer patients for a decade and a half, and 3D printing was a personal hobby of mine that I picked up,” Overshiner said.

He started out printing pieces and parts for work. But years later, “It’s now snowballed into a full-fledged 3D lab.”

These days, he’s able to print almost anything the healthcare system may need.

“So we can print the anatomy of patients and surgeons can then pre-plan their surgery cases that are complex and kind of eliminate problems before they go into the operating room,” Overshiner said. “Everything from mobility aids for rehab patients to prototypes for the school of medicine researchers.”

Since 2017, they’ve grown and expanded into the lab they have now, with multiple printers and materials working constantly.

“We can customize treatment devices specifically for patients,” Overshiner said.

“We can learn, seeing and reading and looking at pictures or videos but having that hands-on piece for you to be able to hold kind of ties all that together,” said Heather Humphery, nursing professional development practitioner at Riley Hospital for Children.

Children’s hearts are small, roughly the size of their fist and, sometimes, no larger than a strawberry, Humphery said. So these large, 3D-printed models that can show parents the kind of heart defect or health issues their child is dealing with up close have become a critical way for doctors to explain health issues and how they’re caring for patients.

“Just seeing that there, you can actually visualize where that hole is and what might be needed for closing it,” said Dr. Jyoti Patel, pediatric cardiologist at Riley.

Patel said pivoting from pen and paper to 3D models has allowed them to show parents exactly what kind of issue their child is facing, and it makes a massive difference.

“You can see that like, ‘Oh wow, there actually is a hole in the bottom two chambers of the heart,’ which is kind of an interesting and somewhat tough concept to grasp at times that there is actually a hole there,” Patel said.

And over the years, these 3D models have become a vital part of the care IU Health offers.

“They’ve brought a piece that I wouldn’t want to be without, moving forward,” Humphery said.

In the five years since opening the lab, Overshiner said they’ve built it into a leading spot in the Midwest while improving patient care.

“They’ve seen the benefits of it firsthand. We’ve had patients tell us, ‘This is the first time in five years that I’ve actually understood what’s going on with me because they actually have a visual representation that’s just easier to understand,'” Overshiner said.

With technology evolving and improving what they’re able to print out, Overshiner said these 3D models have the ability to make a massive impact on patient healthcare in the years to come.

“It’s got so much more potential. We’re just scratching the surface,” Overshiner said.

The Editor31 mins ago

The Editor46 mins ago

The Editor1 hour ago
Health

The Editor9 mins ago

The Editor12 mins ago