Less than 60 percent of children in the US got the flu shot last year, down by 1.1 percent from the year before, the US Surgeon General warned yesterday.

That falls far below the 80 percent vaccination rate that the government urges could give children, who are especially susceptible to the flu, so-called herd immunity.

The Centers for Disease Control and Prevention (CDC) estimates that as much as two thirds of those children would have lived – if they had gotten vaccinated.

On Thursday, US Surgeon General Jerome Adams urged Americans to get their shots, and especially to get kids over six months old vaccinated as this year’s flu season begins. 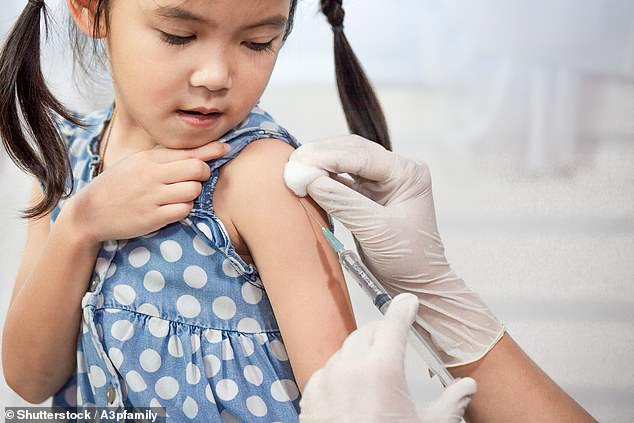 Last year, 180 children died of flu, and the Surgeon General warned on Thursday that these deaths were largely preventable – if vaccination rates hadn’t been 20% short

Every year, the flu makes its way around the world.

Every year, health officials plead with the public to get vaccinated.

And every year, some fraction of the population fails to do so. Consistently, these people make up the majority of the death toll when the final tally is made.

Granted, the flu shot is not a guarantee that you won’t get the virus.

The vaccine is actually more effective in children than it is in any other population, however.

And their immunity is the foundation of ‘herd immunity,’ according to Mayo Clinic pediatrician and vaccine expert Dr Robert Jacobson.

‘It turns out that school-age children are the people that start the flu outbreaks in the community,’ he says.

‘Frankly, vaccinating school-age children will drastically reduce the disease burden, because this is herd immunity and [effectively] vaccinates those who are too young or too elderly for the shot to work, or who have immunodeficiencies.’

This is why the surgeon general called vaccination a ‘social responsibility.’

And of course, it protects the children themselves, for whom the flu can more easily become more severe.

Last year, the majority of those that died were not vaccinated.

Dr Jacobson says that 100 percent of the population over six month old should be vaccinated against the virus, and that doctors, nurses and public health officials need to make some simple changes to undo misconceptions that stand in the way of vaccination.

He says there are four key reasons that families fail to get the flu shot: they don’t realize it’s (strongly) doctor-recommended, they are not reminded year-round to get it, the shot isn’t offered in enough workplaces and schools, and because doctors too often require an appointment and full exam before they will give the shot.

‘We’re not taking advantage of these things that we know would improve delivery,’ says Dr Jacobson.

‘Until we do something dramatic, we’re going to continue to have this lack of improvement and slips’ in vaccination rates, he adds.

Parents have additional arguments or concerns about vaccinating their children.

‘The first “concern” that I hear is that their kids don’t get the flu, their family is naturally immune to it,’ says Dr Jacobson.

He says that these family members may have never been diagnosed with the flu due to the relative efficiency of simply ruling out other illnesses compared to the high monetary cost of administering a flu test (and doctors would likely prescribe the same bed rest and fluids as they do for many other viral illnesses).

‘Others think the vaccine makes them’ – or their children – ‘sick, which is a very common misconception,’ says Dr Jacobson, citing a study of ‘hundreds of veterans’ conducted in Minnesota which he says thoroughly debunked that myth.

In the experiment, a small fraction of participants said that they got sick after the shot, and that it was the worst illness they’d had in their life.

They all reported the same symptoms, but not all of them had gotten the real shot. Participants who got a placebo felt just as bad, and the only difference was that the ones who had real shots were slightly red around the injection shot.

‘In their minds, everything that happened to them in the next week is due to the vaccine, and that’s because it’s the only thing out of the ordinary that they did that week,’ says Dr Jacobson.

‘It’s been demonstrated over and over again.’

There is nothing to lose from getting the shot, and thousands of lives to be saved.

‘Our recommendation is that every child and every adult gets vaccinated every year,’ says Dr Jacobson.